Caroline Fiennes founded and directs Giving Evidence.  She is one of the few people whose work has appeared in both OK! Magazine and the scientific journal Nature. A 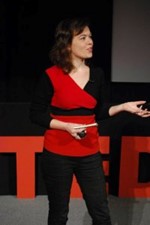 recognised expert in philanthropy, she is a Visiting Fellow at Cambridge University, and for three years wrote the ‘how to give it’ column in the Financial Times, and has advised many donors over many years. She often speaks at conferences and in the press, and is on boards of The Cochrane Collaboration (specifically Evidence Aid ), The Life You Can Save founded by ethicist Peter Singer, the (amazing) Flemish Red Cross, and ID Insight. She has worked with J-PAL at MIT and with its sister organisation Innovations for Poverty Action. She is described by Nobel Laureate Richard Thaler as “charmingly disruptive” 🙂 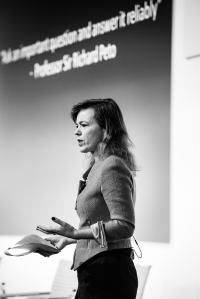 “Ask and important question and answer it reliably”. Caroline addresses a group of donors.

Giving Evidence brings together the best team for each project. We deliberately do not have a set of employees who do each project irrespective of the relevance of their skills. This flexible model allows us to bring a wide range of languages, unusually expert research skills (e.g., in producing systematic reviews), deep expertise in particular sectors and issues (e.g., in education, and beneficiary feedback), and advanced analytical capability (e.g., in various regression methods).

Our Advisory Committee informs and supports all our work and approach.

Our team and partners include:

The EPPI-Centre (Evidence for Policy and Practice Information and Co-ordinating Centre) at University College London, with which we have worked several times on producing systematic reviews

Keystone Accountability who are experts in hearing from intended beneficiaries.

Dr Sarah Sandford has been researching philanthropy for the last 15 years. Her PhD from the London School of Economics was about the influence of large donors. She has worked as a consultant for the OECD on increasing the impact of international philanthropy, and on documenting social innovation and foundations launched in developing countries for a French Business School, ESSEC. She worked as an analyst for New Philanthropy Capital in London, researching and advising large donors on mentoring young people, child refugees and care of the dying.

Gemma Bull has over fifteen years’ experience leading and advising non-profits and foundations globally. She has worked as a senior executive for the largest community grant maker in the UK, awarding £650m every year to charities and local groups. She specialises in strategy and effectiveness reviews as well as enabling organisations to become more accessible.

Gemma has co-authored a practical guide on Modern Grantmaking due for publication 2021, which includes: tips on improving your strategy, how to use digital-era working practices to streamline grant making and how to better support participatory approaches. She has specific expertise in funding that supports community-led activity, and in 2018 was recognised globally as a senior executive helping to create more welcoming workplaces and making a significant contribution to inclusion beyond work.

Dr Sylvia McLain is a physical scientist, with a PhD in Chemical Physics who has worked at the intersection of Physics and Biology. She raised funding for, and ran, her own research at Rutherford Laboratory, Oak Ridge National Laboratory in the US, King’s College London and the University of Oxford, where she led a research group. She has published in leading peer-reviewed academic journals, won awards for research, given 40+ invited scientific and public talks and panel discussions.
She was for four years a raft guide on the Chattooga River in South Carolina

Isabel Kelly, director of Profit With Purpose, and expert in social purposes of businesses is a long-time colleague and ally. Collaborations include a strategy review of the Stewarts Law Foundation (a corporate foundation), and developing a social engagement strategy for a hospitality company.

Dr Helen Owen is a PhD epidemiologist, with experience of various types of data-collection and analysis, both in the developed and developing world. She has studied anti-malarial bed-net distribution, and taught at the London School of Hygiene and Tropical Medicine. She worked with Giving Evidence on a study of foundation effectiveness.

Dr Leonora Buckland has worked with Giving Evidence on the study of a C&A Foundation programme and on mental health. She has worked for various organisations in social entrepreneurship, social investment and philanthropy, including the Skoll Foundation, the Venture Partnership Foundation, and the London Business School. She has written for the Stanford Social Innovation Review on microfinance and European venture philanthropy, and wrota e report on European banks’ social and impact investment. She has worked in strategy consulting and in the civil service. She has a 1st class degree from Oxford University, a Masters in International Economics from SAIS, Johns Hopkins University and a PhD from Oxford University.

Diego Escobar worked with us on the work in Latin America for the Inter-American Foundation. Based in Mexico, he is Honorary Research Associate at the UCL Institute of Education’s EPPI-Centre, where he is involved in conducting systematic reviews. Previous work in the University of Guadalajara, the Ministry of Culture of Jalisco and as an independent evaluator for national and sub-national government agencies in Mexico has been both research and practice orientated, focusing on institutional development for accountability and effectiveness in the areas of social development and the arts. He has a master’s degree in Philosophy and Public Policy from the London School of Economics.

1 Response to Our team