Should You Donate to Sport Relief?

This weekend, Sport Relief is running masses of activities this weekend to raise money for charity. But not all charities are the same. So is Sport Relief a good one?

Yes. Before we get into the reasons why, let’s be clear about what Sport Relief is. It’s run by Comic Relief, and happens in the years in between Comic Relief’s biennial big TV campaigns. Comic Relief is a grant-maker: it doesn’t run programmes or activities or sports clubs or day centres itself, but rather finds other, ‘operational’ charities which do and it gives them money.

Charities vary markedly in how good they are. Some do an OK job, some an amazing job, some achieve nothing at all, and some are actually harmful. It sounds almost heretical because we tend to think that all charities are good. But we also think that teaching is a good thing, and so is providing medical care, and yet we’re familiar with the notion that some teachers are better than others and some doctors are better than others. Some charities are demonstrably 25 or even 200 times better than others. It’s worth giving through a grant-maker if, and only if, it does two things better than you could on your own.

First, find and select better charities than you could. And second, support them better than you could, that is, if they can make your £50 achieve more than you could on your own. Comic Relief does well on both these fronts. On finding better charities than you can, it’s pretty well known, so charities go to it. On selecting charities, it sensibly focuses on just a few goals. Bill Gates focuses on eradicating polio and improving US education; Warren Buffett’s son’s foundation tries to prevent prison rape; the Wellcome Trust (the UK’s largest charity, which used to own GlaxoSmithKlein) aims to enable ‘extraordinary improvements in human and animal health’.

Donors are almost universally more effective if they have goals and a focus, rather than just dishing out cash, because they get to understand problems better and can develop better solutions. 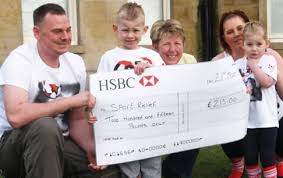 Comic Relief’s overall goal is “a just world free from poverty”, within which it focuses on mental health, climate change, street children, HIV/AIDS, older people, and sexually exploited trafficked people. Notice that those are not all the easy, fluffy causes – it’s chosen some tricky areas which really need attention. And it publishes a vision and strategy for both its UK and non-UK giving, with goals for each programme (e.g., “Ensure that people with mental health problems are at the heart of decisions that affect their lives, whilst supporting recovery and reducing stigma and discrimination”). It stays fresh by reviewing its focus areas every four years, checking that they’re still priorities, and involving experts in each area.

Identifying good charities can be hard because the differences are often subtle and buried. Comic Relief employs staff with expertise in its focus areas, and uses published assessment criteria in order to make good decisions. This is precisely the same reason that you employ professionals to find good investments for your pension rather than doing it all yourself. Not all grant-makers do this: for example, NatWest recently chose charities based not on how good they were, but simply on how popular they are, which is unlikely to mean that it found the best ones. Comic Relief supports charities which directly support individuals and also ones which change government policy, public awareness and system-wide change. An example of the latter is Comic Relief co-funding a major campaign to change attitudes to mental health, ending the discrimination which people affected can face.

OK, but what does Comic Relief actually achieve? Well, it reports about all that. That is oddly rare among grant-makers. It reports on how much it raises, and reports on what it achieves – which after all is the aim of the game.

Turning to the second point, Comic Relief does support charities and causes better than you could on your own. It uses its brand and contacts in ways which you couldn’t do on your own. It gets Sainsbury’s to stock more Fairtrade, gets Alesha Dixon and Chris Moyles to climb Mount Kilimanjaro to raise awareness of malaria, and works with the BBC to make programming highlighting abuse of older people. Plus it uses its influence with other funders.

There are other great grant-makers too which are good routes for your money, such as BBC Children in Need. These choices about which charities to back, and how, make all the difference to what your money achieves. Because in terms of impact, it ain’t what you give, it’s the way that you give it.

In general, how can you distinguish a good charity from a bad one?–>