Can people tell posh champagne from cava in a blind trial?? – an experiment

Posted on November 8, 2019 by carolinefiennes

{Warning: this post has nothing to do with philanthropy. It’s to do with science. Sort of.}

As widely discussed in the press (i.e., written about by me on Twitter), I 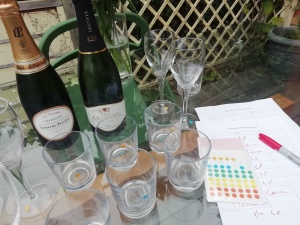 recently ran a little trial to see whether people (specifically myself and some friends and family) could distinguish between posh champagne and much cheaper cava.

In short, we couldn’t. Well, *I* could, and my family could, but on aggregate the answers were barely better than random.

Because this is *science*, and not just a random drinking game, I’ve written it up. Not in the Journal of Champagne-ology, which surprisingly doesn’t exist, but below.

You could replicate this test! And please do – and send me the data so that I can combine it with ours. Bigger sample sizes make for better science! The pursuit of knowledge requires that we drink more bubbly: Don’t say I never told you anything useful.

Cheap bubbly often out-perform posh champagnes in independent taste-tests such as Which? Magazine’s reviews. Celebrity British chef Heston Blumenthal did a blind trial in the City of London (where high-rolling bankers drink much bubbly), in which the public could vote for their various out of various bubblies – and more than half of them thought that expensive champagne was less good than Blue Nun (a cheap, white wine) which had been put through a Sodastream.

So, for no particular reason other than it might be entertaining to know and indeed save some money, I ran a trial.

There was an upcoming family party. We took (a) a bottle of Laurent Perrier and (b) a bottle of Cava Arestel. The choice of those was because they both happened to be in my house – probably brought by guests for some party or other (very scientific…)

Each person at the party was given two identical glasses, one with an 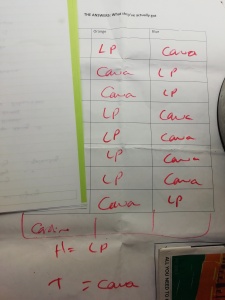 {*You can see from the photo that ‘H=LP’ meaning that if the coin came up heads, their first glass was Laurent Perrier & the other one cava; if tails, the other way around.}

We (meaning, Fred and I) then gave everybody their two glasses at the same time, at the start of lunch. The deal was that everybody had to ‘declare’ at 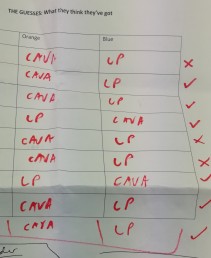 some point during lunch. Fred recorded the declarations on a sheet imaginatively called ‘what they think is in their glass’. See photo. He then compared their declarations to the truth.

Sample size calculation: This was a party. The no. people (10) was determined by the size of our host’s living room, of whom one didn’t participate as they don’t drink.

Most people found it quite hard to guess.

Since everybody got both drinks, and knew that, they gave different answers for what was in their orange glass vs in their blue glass. So we only need to compare their answer & reality for one colour of glass.

Number of people who were correct: 6/9. Random guesses would have been 4.5/9, so the responses were barely better than random.

We also did some (illegal!) sub-group analysis, e.g., on gender and family membership, but since Professor Sir Richard Peto says that “sub-group analysis kills people”, we shan’t report that. Except to say that everybody in my immediate family got it right 😉

Most people can’t tell, so you might as well serve cheap stuff! And presumably if you do so confidently, like most things in life, you’ll get away with it. Professor Jimmy Volmink of the University of Stellenbosch nailed it:

Please replicate this trial – use precisely our method – and send me your results. It’d be good to know whether these results are true more widely, i.e., whether we’re safe to serve any old junk to most audiences 😉