Listening to those we seek to help

Posted on October 30, 2014 by carolinefiennes 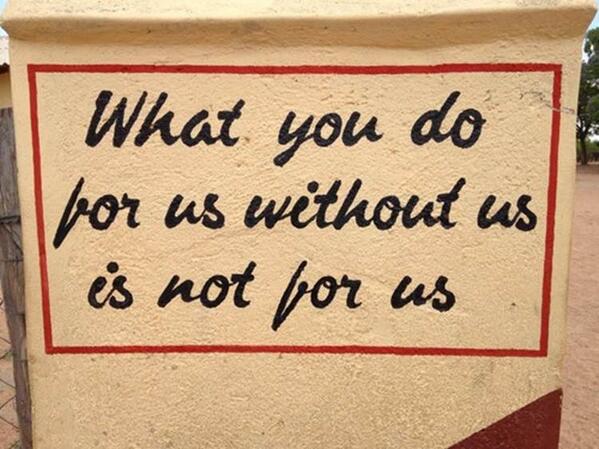 From a school wall in Zimbabwe, tweeted by Melinda Gates

source of funds – charities don’t normally get funds from beneficiaries and hence feel no financial pressure to listen to them. A recent report by Médecins Sans Frontières shows the result, recounting the apparent abandonment of war-torn areas and emergency situations by most aid agencies, which seem instead to follow funders’ wishes to operate in safer countries.

It’s tough for beneficiaries to tell an NGO, government or funder directly what they want or what they think of what they’re getting. It’s harder still for would-be beneficiaries. There are few feedback loops in our sector, though there is an outbreak of intriguing work to create more.

GlobalGiving UK is “an eBay for development”, directing donors to grass-roots organisations. To enable the organisations to hear and heed the constituencies they’re ostensibly serving, it developed a simple tool that requires a charity to recruit about 20 volunteer “scribes” who go out and interview local people. The charity chooses the questions, which GlobalGiving recommends be very open. Typically, the scribes ask for a story about a need in the community and one about an organisation being helpful (or not). They do not ask “what is your opinion of organisation x?”

There are two clever bits: first, the interviewer is not part of the charity, which probably makes the stories more honest; second, GlobalGiving – using a system designed by a man with a neuroscience PhD – analyses the stories for patterns. For instance, the contexts in which the charity is mentioned and the sentiments expressed about it. Maybe the charity doesn’t get mentioned much, implying that it’s not achieving much. The frequency with which various problems are mentioned can show the charity where it might target its work.

Stories collected this way over the summer by going house-to-house in Lambeth, south London, featured cancer, the passport fiasco and alleged corruption in local government. Charities were often cited unprompted: one advertising executive was so struck by Greenpeace protesters risking jail for their altruism that he’d started volunteering locally and taken his children to protest at Shell’s sponsorship of Lego.

The Department for International Development is piloting ways of getting feedback from beneficiaries into its programmes. The Association of Charitable Foundations recently provided training to foundations on listening to beneficiaries, and the White House hosted a summit last year about improving feedback to US government programmes. And a group of foundations, led by the Hewlett Foundation, has announced a fund to improve philanthropy by “listening to, learning from and acting on what we hear from the people we seek to help”.

We should all get good at doing that.

1 Response to Listening to those we seek to help